I’d been back from my East Coast leg of the tour, along with the World Series, for three days, and I was already set to hit the road for San Francisco.  On the surface you’d probably think it was asinine for me to even bring it up with my wife, but this show was different.  For as many times as I’ve seen Metallica, last night’s ‘All Within My Hands’ benefit was the first time I’d seen them acoustic.  It was my 7th show of the tour, but the first that wasn’t part of my ‘Black Ticket’, since it was a charity show.  (No complaints from me, though.  I’m happy to support a great cause, and the work that the ‘All Within My Hands Foundation’ does with local food banks fits right into the kind of organizations I support here locally.)

Getting into San Francisco was a breeze.  I’d made reservations to stay at the Hotel 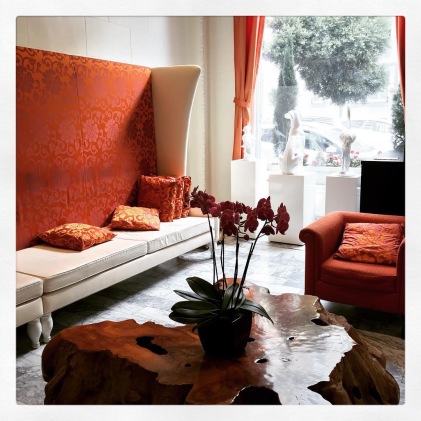 Vertigo, inspired by my love of Alfred Hitchcock, and the amazing job they’d done modeling the hotel after the style of an all-time classic.  (Vertigo was even filmed, in part, at this hotel.)

It was a clear, crisp day, so walking the city in the morning and afternoon was a nice distraction.  If I don’t log an easy 5-10 miles on foot a day when I’m out of town, then I’m not doing it right.  I made my way through Chinatown and picked up a few treats for the road and back at the hotel, before grabbing a bite to eat at ‘Naked Lunch’.  Ironically, Naked Lunch was next door to ‘The Condor’, which lays claim to the ‘Birthplace of the world’s first topless and bottomless entertainment’.  I know what you’re thinking, “Doug, it’s next to a strip club.”  Sure, in part, but San Francisco was also a hub for beatniks in the late 50’s/60’s, and the book’s author, William S Burroughs, was a focal writer of the Beat Generation.  How was lunch?  It looked nice, but sadly the chicken was too chewy and didn’t have the flavor I was hoping for.

The show was held in The Masonic, a smaller venue similar to The Paramount in Seattle.  The lower bowl was reserved for the big sponsors and donors, but I was more than happy with my seat at the front of the balcony.  (That’s where most of the real fans were anyway – which isn’t said to disparage donors in the lower bowl, it’s great to have their support.)  It was my 2nd time seeing Metallica in San Francisco after seeing them on nights 3 and 4 of their 30th Anniversary xXx shows back in 2011.  Seeing them in 2011 felt like being part of an elite club, and in reality it was.  This time through was definitely still special, but it was a noticeably different set of fans than The Fillmore 7 years earlier.

I sampled Metallica’s ‘Blackened’ whiskey before Cage the Elephant opened with an inspired set.  I saw Cage play a few years back with Amy, and had asked if she wanted to come along, but she passed.  Metallica took the stage after 9:30pm, and ended up playing a dozen songs with the help of a backup percussionist, guitar, slide guitar, and keyboard.  James battled feedback and monitor problems early in the set, which could have been disastrous, but once that was fixed the show hit its stride.

Song selection was similar to past one-off acoustic performances, but it was mostly new to me, so I didn’t have any complaints!  Bleeding Me was a surprise, but Horsemen and Hardwired were highlights of the night.  I’ve never been a huge fan of Hardwired (love the album, but it’s not my favorite song,) but they absolutely killed it!

I was lucky enough to grab a poster before the show, which was good since the guy said there were only 100, but no dice on a pick.  (If you have a spare, drop me a DM!)  I’m hoping to find one down the line (and would be happy to donate to AWMH for one).

Driving back to the airport was a sad reminder of why an organization like ‘All Within My Hands’ exists, along with so many others.  Drug use and homelessness are rampant in the city, similar to Seattle, which is completely opposite of both cities cost of living.  So many people have so much, while so many have so little, and some, nothing at all.  It’s a sad commentary on society.  A true story of haves and have nots.  We can do better.

My family and I have had a truly fortunate year.  I’m grateful every day for the life we have.  I try not to take it for granted, while remembering to have compassion for others and find ways to help locally here at home.

I’m on a flight to Boise, Idaho, after a quick trip to Las Vegas for show #8 of the tour.  I literally just got back last night and was up bright and early this morning to head towards #9!

Boise was more of a ‘game time’ decision.  I’ve been struggling with some medical thing the last week, and have a follow-up appointment scheduled when I get home tomorrow.  For all the years I’ve been traveling, this last trip to Vegas, and today, are the first times I’ve actually packed my medical insurance card – just in case.  Needless to say, I hadn’t decided if I would, or could, make this trip, but decided that ‘dad didn’t raise a quitter’, and if I was going to be in agonizing pain, I might as well be at Metallica!  (Is there anything more ‘metal’?)

I’d missed my annual October work trip to Vegas, spending it on the East Coast instead.  Unlike previous trips to Vegas, I actually rented a car this time through.  I wanted to check out an OpenDoor property, (so I could write the trip off on my taxes,) and had plans to branch off from The Strip.  I stayed at the Hooters Casino hotel, which was about

on par with a La Quinta.  The price was right, it was literally $0 (you know, free,) before the Las Vegas resort tax, and located right off the strip by the MGM Grand, which was an easy walk to the arena for Monday’s show.

I spent Sunday getting settled and checking out the OpenDoor listing, before seeing ‘Opium’ that night at the Cosmopolitan, followed by a steak at New York, New York.  I saw the ad for ‘Opium’ on the back of a magazine and knew I wanted to see it since it was from the same production company that does my absolute favorite Vegas show, ‘Absinthe’.  ‘Opium’ was OK, but not great.  It followed a similar format and pacing as ‘Absinthe’, but was set in a spaceship touring Uranus, instead of a circus tent.  ‘Opium’ lacked the performance WOW from ‘Absinthe’, and while the humor was similar lowbrow, it lacked the bite.  The circus tent setting and hodgepodge of décor at ‘Absinthe’ was missing too.

Most of Monday was spent in the car, taking a long route through the ‘Valley of Fire’, and past Lake Mead and the Hoover Dam.  The ‘Valley of Fire’ was a visual feast after leaving the garish sites of The Strip and passing through the brown, dull desert highway.  The sudden explosion of red rock was like moving from black and white to color TV. 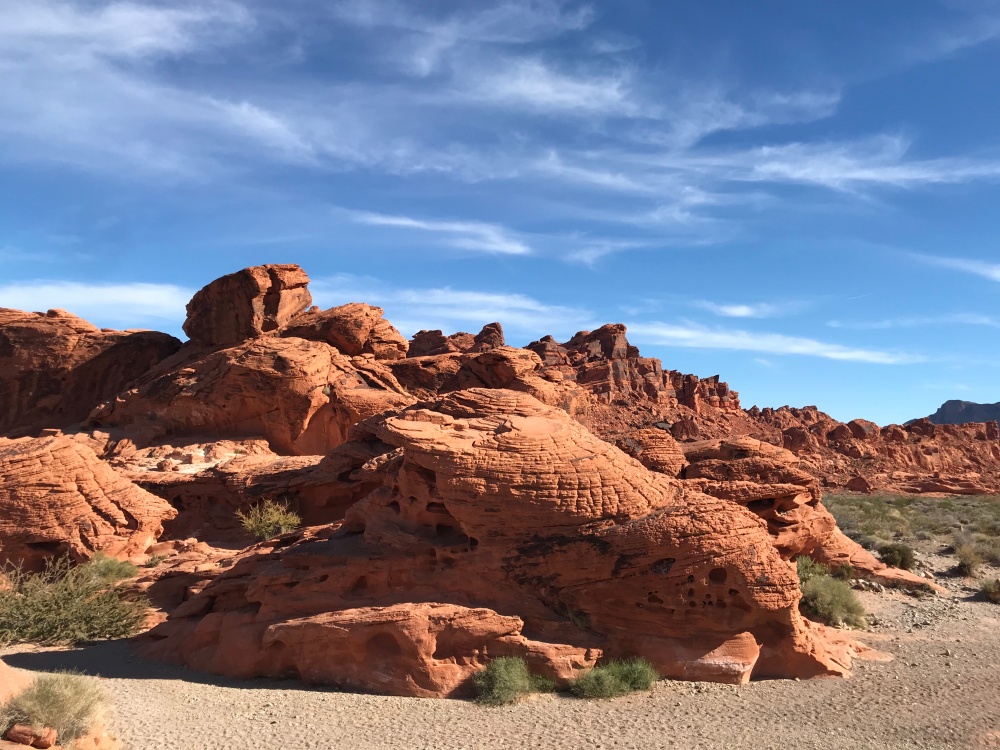 I made a few stops for pictures and a short hike at the ‘White Domes’ before driving out to Lake Mead. 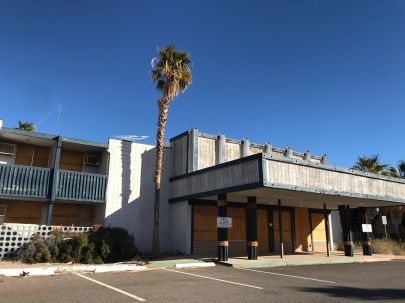 Lake Mead must have been really nice in its prime, but today it looks like an empty shell.  I stopped at Echo Bay and past a rundown and long vacant hotel, along with a sign pointing down to the lake and a promise of what used to be an outpost for house boats.  I talked with two old guys that were coming in from fishing the lake, and we talked about how much higher the lake used to be.  (The lake looked like it was at least 20-30’ lower than where it had been, judging from the discoloration in the rocks.)  It was the same thing at Hoover Dam.  There’s no way the water level drop is a temporary thing.  Just look at the lines.  (Meanwhile our President denies that global warming is real, while we see record temperatures, wild fires, and drought across the country.)

After a brief stop at ‘Great Buns Bakery’ for a delicious pecan roll (and a cookie… and a Danish,) I was off to Metallica.  In hindsight, spending close to 8hrs on the road before hitting a show probably wasn’t the best plan, but you only live once and there were things I wanted to see.  The crowd had great energy, probably the second best to Philly, and a huge step up from Albany.  A couple got married on stage, after all, Vegas, and a pre-show of 12 dancing girls in half tops on stage kicked things off.

After the show I was off to the tables for the quickest (shortest) hands of blackjack ever, (I lost every hand,) then made my way to Shake Shack to end the trip on a high note.  It was a quick few days.  I’d asked Amy if she wanted to come, even if she skipped Metallica, but she wasn’t interested.  I did ask though – repeatedly – which I didn’t do for trip to the Dakotas.  Maybe next time.