This has been a busy year for travel – In some ways, ridiculously so.  When Amy heard that I “won”, you could almost hear the eye roll.  It’s funny, Amy and I literally talked about it yesterday on the way to Foo Fighters.  In the past I’d always told friends, or strangers that asked me how I “got away” with traveling so much for baseball, that I was lucky that Amy “supported” my travel.  As time passed, she became “OK” with it, and now we have a new word for it.  “Tolerates” it.  That’s kind of a telling word, isn’t it?  Somehow it de-evolved from support (and at times encourage,) to OK, to tolerates it.  Clearly I’m going to have to be more aware of timing when looking at future dates!

Oh.  What did I win?  A pass to see Metallica pretty much anywhere and anytime during 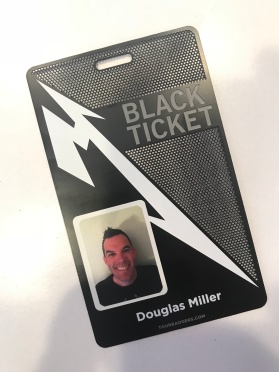 their current US tour.  And win probably isn’t the right word – How about won the opportunity to purchase?  That’s probably better.

Metallica put out an opportunity to buy a new pass called the “Black Ticket” ahead of their 2018-2019 arena tour.  With the Black Ticket I can go to any show I want on their tour.  There were only 250 Black Tickets available, so grabbing one made me part of an exclusive club.  How many shows can I hit?  1, 2, 10, 20?  More?

Metallica is an important band for me.  I was a late concert bloomer.  I didn’t see my first show until my Senior year in High School, and it was Metallica.  The show was pure magic.  I had an extra ticket for the show that I traded for a ride with Jody, a guy from work.  (I bussed tables at a local pizza restaurant called Spiro’s, and Jody was a waiter.)  Jody had a mullet, a mustache, and a bitchin’ convertible Camaro.  (Mine had a top.) 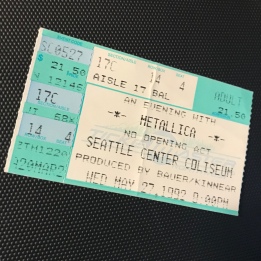 Our tickets were in the top deck, near the top row, and behind the stage, but Jody had friends down low.  We met up with them when we got there, and just walked right down with them.  I couldn’t believe the ushers didn’t check our tickets, but at that moment in time, they didn’t.

The show was ready to start and the floor had already erupted.  Security had given up trying to keep people off the floor since so many had busted through.  I found my way down there too.  It was 1992.  The Black Album was the album, and I was on the floor to see Metallica for my first show.  It was pure ecstasy… of gold.

The first time I heard or saw Metallica was on MTV.  The video for ‘One’ was a nightmare inducing (literally) infusion of sound and emotion.  I’d never heard something so fast and aggressive.  “Left me with life in HELLLLLLLLL”.  I was hooked.

I was able to get dubbed copies of Justice and Master which I used, along with Faith No More, as a walking soundtrack on the long walk to work.  My tastes had graduated from Top 40, to ‘hair bands’ (which are still guilty pleasures for me,) to the harder stuff I’d hear on Z-Rock, an all metal AM station (of all things).  Get your Metal Militia dog tags!  There was a ‘metal’ store by the ferry terminal too that specialized in concert t’s and Doc Martens.

Fun fact.  I had to get my mom’s permission first.  Justice was a short time removed from Garage Days Re-Revisited, so I remember there being some outrage around their Misfits cover, Last Caress.  You know, the whole killing babies and raping mothers thing.  I asked her for permission to dub it.  (I’m not sure why, it would have been easy to sneak it, but I was a good boy I guess.)  My mom was a librarian all of my life; incredibly liberal and anti-censorship, as librarians are.  She read the lyrics to every song on Justice and handed it back to me.  “Looks good.”

(I did not do the same thing with Guns N Roses “Appetite”.  I guess I wasn’t ‘that’ good.)

It was settled.  Metallica would be my favorite band until the end of time.  They’d cut their hair, feud with Napster, and even make an extremely unpopular concept album with Lou Reed.  It didn’t matter.  I’d see them as they came through Seattle, I traveled to California for their ‘Big 4′ show and shows in Texas, and I was one of the lucky few to see their 30th Anniversary shows in San Francisco.

So that brings us to today.  I flew into O’Hare to save money, which also gave me an excuse to rent a car and see the Brewers the following day.  I was shaking off cobwebs after seeing the Foo Fighters the night before.  We’d gotten a hotel room at SeaTac to save the additional 2-3 hours on the road (and less sleep) if I’d driven home.  I walked across the street to the airport that morning and left the car with Amy.  It was still a mystery how I’d get home, but I’d worry about that later.  I caught a little sleep on the flight then made my way to Madison.

Let me tell you, that’s a boring ass drive.  I stopped early on at the ‘Belvidere Oasis’ outside of Chicago for some caramel corn and a Coke.  They don’t have traditional exits for gas stations like in Washington, they have things that are more like rest areas with food courts. 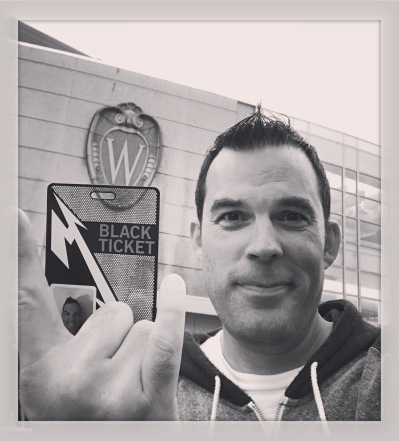 By the time I hit Madison it was pouring down rain and considerably later than I expected.  I still had plenty of time though and wasn’t worried about it.  I parked for free (to save $10) then walked a half mile in the rain, along with a lot of people, to the show.

Check-in for my Black Ticket was pretty smooth, just wet.  The floor wasn’t very big or oversold, which left plenty of room.  It’s a huge departure from 1992, to be sure.  I’ve seen Metallica over a dozen times, and every time has been on the floor.  I miss the action from the 90’s.  Crowds are so subdued now, while I’m there banging my head and screaming along.  It always makes me smile when the random pit will open up by me, as I get moved and pushed by the sudden surge of action.

I heard ‘Confusion’ and ‘Spit Out The Bone’ for the first times tonight.  The crowd was louder than the stadium shows I was at last year, but I’m sure that’s driven by the roof and closer quarters.  I was able to snag a few picks too – Score!

Monday was Labor Day.  Big deal, right?  Well, it must be in Madison.  I swear the whole town was closed.  I drove down and snapped a picture of the capitol, then drove around close to 40 minutes trying to find something to eat.  What I wanted was some fresh Wisconsin cheese curds.  What I got was Taco Johns, which was one step up from a Taco Bell at best.

The drive to Milwaukee for Brewers/Cubs was moving at a good pace… until I got there.

From there is sucked.  It took me close to an hour and a half to get off the freeway to park.  What a total cluster.

I’d paid good money (too much) for the ticket and didn’t get in until the bottom of the 2nd.  In hindsight buying such a good ticket was dumb, especially since I already knew I was going to leave early to get back to O’Hare.  (This was a one-nighter trip.)

I’ve only been to Miller Park once before and remember it being “OK”.  On second viewing, it’s a ‘Bottom 5’ park.  It’s not just the parking, which was wholly unacceptable, it’s the layout and the concessions too.  Miller Park is pretty much the same 3 stands repeated in each zone of the park.  There’s just nothing special about it.  I had a small bag of cheese curds in Maddy’s honor, but decided I’d had better curds at A&W or Dairy Queen.  Some of that may be amplified disappointment from my lack of morning success, but they just weren’t great. 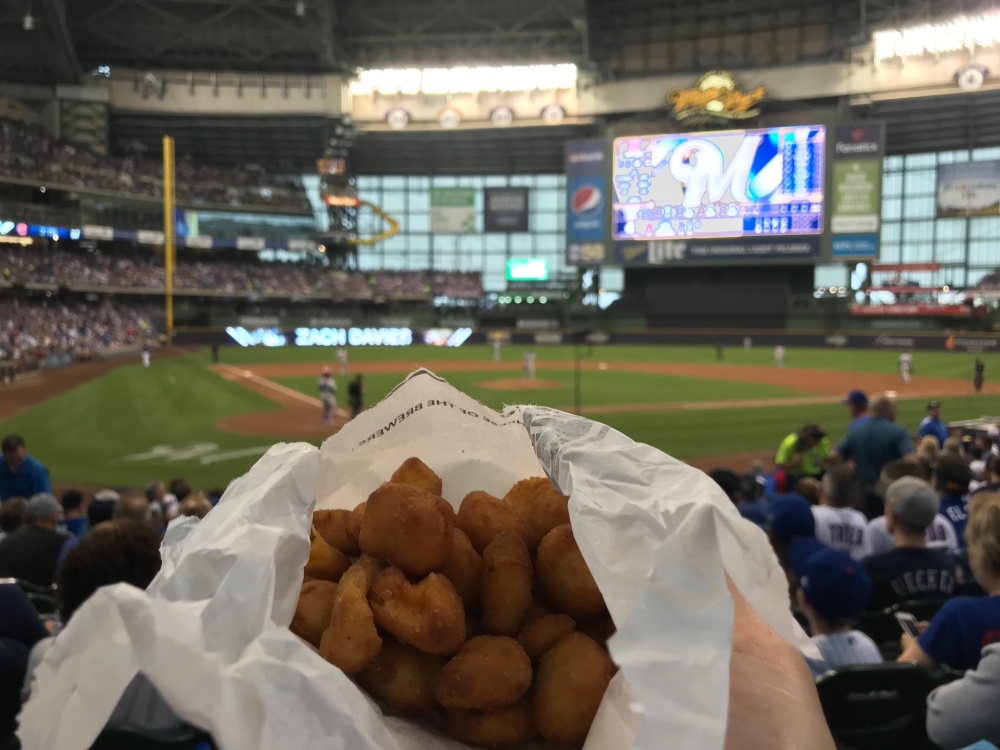 Same goes for the concourses.  Walk around the park and your views while walking are garbage.  There’s a virtual dead end “U” above home plate that’s cramped and difficult to see from, and walking from section to section your view is largely obstructed by walls, and walls, and more walls.  (And that includes out by the Batter’s Eye in CF.)  Night and day difference compared to Safeco Field.

I left after the 7th inning stretch to the beat the traffic, which was a good call, because it’s all under construction, just not today, since it’s Labor Day.  My GPS did me right and kept me on and off the freeway all afternoon to avoid the backups.

Back at O’Hare I scratched the itch for a Chicago deep dish and another bag of caramel corn.  The deep dish was weak, but I wasn’t expecting much, it’s airport pizza after all.

From Seattle I caught my first Kitsap Airporter, which was relatively painless, before hitting the pillow around 1am. 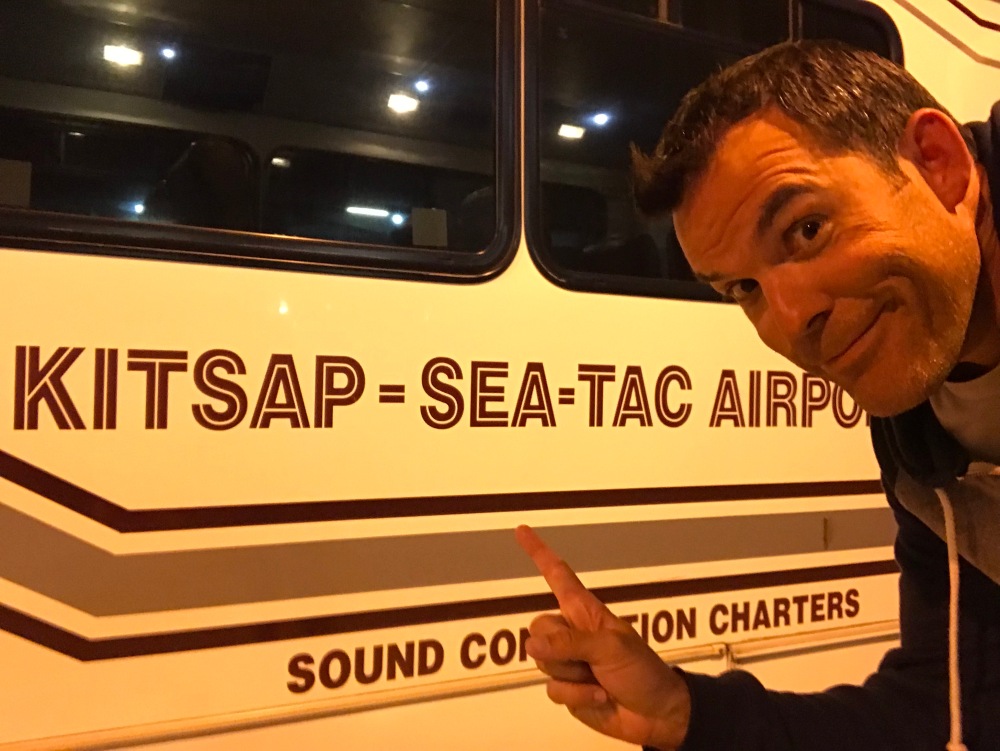 Great start to the new tour!  Next up are the Dakotas.