This is the first baseball trip that I’ve taken with the girls.  They’d been asking to go for the last year or two, or at least they’ve been asking when they’d be able to go, and now seemed like the perfect time.

It’s no secret that I’ve been fighting a midlife crisis.  I’ve been dissatisfied with work, and the years seem to be flying by at an alarming rate.  It seems like I’ve just been so busy since the kids have been born.  I’m jealous of the time Amy has had with them the last few years, and really wanted ‘my turn’, so to speak.  Amy was invited, but chose to save her time for Disneyland this summer, so it’s just me and the girls on a weeklong trip through California.

We could have flown, but where’s the adventure in that?  The overall consensus, when people heard what our plans were, was either a laugh or a raised eyebrow.  After all, driving thousands of miles with 2 kids under 10, and on my own, is ambitious at best, and pure insanity at its worst.

7 days in and it’s been perfect.

Truly.  I can’t think of how the trip could have gone (or go, 1 day left, after all) better.  Sure, the driving could have gone faster, but all things considered, it’s been easy.

It was great to see Grandma Brown on the way down.  Grandma Hagenauer is recovering from pace maker surgery, so it wasn’t a good time to visit.  I debated early on whether to take I-5 the whole way down, or take 101 to see the Redwoods.  I picked the Redwoods and hours more on the road, and I’m glad I did.

The girls were in absolute awe of the Redwoods, and it’s been one of the highlights of the trip for me too.  It’s hard not to get emotional when the kids are so enthralled by nature.  We toured the pullouts, did the drive-thru tree and what seemed like every gift shop, before making our way to Oakland.

I’d been to Oakland before, and it’s pretty much the same shithole with the same nasty food.  It was good to see the Mariners open the season, and it was my first road Opening Day.  The 3 of us signed Opening Day baseballs to commemorate the trip.  (Mine is displayed proudly above my desk in my office.)  Getting into Oakland Coliseum wasn’t my proudest moment though.  I was cutoff coming in, which nearly caused an accident, followed by me yelling out that the guy was a ‘fucking idiot’ or something to that effect.  Whoops.  I try not to swear around the girls, so immediately apologized.  Megan’s response?  That’s OK, we don’t even know that means.  Phew!

From Oakland we spent the next day touring San Francisco.  We drove through the city, walked the Wharf, and hit the Lucasfilm office at the Presidio to see the Yoda statue.  (That was my pick.)  We started the day by hitting AT&T Park, which was a good idea because it reaffirmed my decision to see a game this coming Saturday.  The kids liked the park, and Maddy is anxious to do the Coke slides.  Maddy was also a fan of the tall statue of Willie Mays.  I have a playlist of baseball songs that we alternate to on the way down (along with stuff they want to listen too,) and songs like “Say Hey!” and “Have You Seen Jackie Robinson…” are a constant go-to on the drive down.  We were sure to hit the souvenir shops too, to save time on Saturday, since the current plan is to start the drive back after the game. 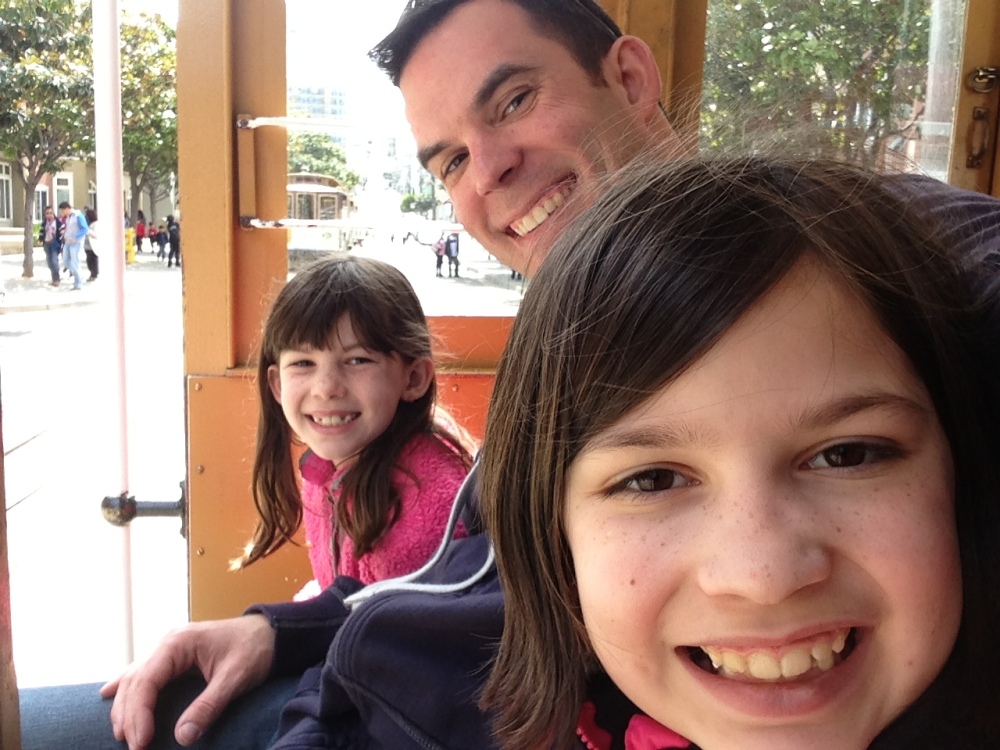 The trolley was the highlight of the day for the girls.  (Well, maybe Ghirardelli’s was, but I’m sure the trolley was a close second!)  Watching their faces going up and down the hills was classic.  It was a fun day, but traffic leaving San Francisco back to Oakland was a nightmare.  I hate driving in SF, and at that point it was the only moment I’d felt on edge.  Between the traffic and the hour wait to catch the trolley back to our car, I realized I couldn’t have done this trip 2yrs ago, or even last year.  I’d battled anxiety problems for a short time, but have been able to manage it through breathing exercises.  It felt great to feel like I was in control again.

Wednesday was an “open” day.  I had it in my mind for a while that we’d drive to LA and Dodger Stadium, but I wasn’t locking it in until I was sure everyone was up for it, including me.  (I also hadn’t mentioned it to Amy, because I knew she’d question my sanity.)   It was obvious pretty early on it would be fine though.  The kids have been awesome on the road, so we made the 6+ hour drive (with stops), took a quick swim, and hit Dodger Stadium!

I’ve been to Dodger Stadium a few times, and 2 of the times I have a self-shot of me holding a picture.  One with Amy and Megan as a baby, and one with Amy holding Maddy, with Megan looking on.  It was special to take a shot with the girls there and in person.  Megan gave the park a double thumbs up, and Maddy gave it a so-so because they only had chocolate and vanilla ice cream.  Priorities!  Haha.

Tacoma Rainiers Opening Day.  Yesterday was my first (and last) aspirin of the trip, I took 2, and was the first day I was feeling a little ‘punchy’.  I got over it quickly, thankfully, and we took the afternoon in LA to see the La Brea Tarpits (kid’s choice) and to go back to Pink’s Hot Dogs (my choice).  I’d always wanted to hit the tarpits, so when the girls said they wanted to do that I was all for it!  We passed on Universal Studios when Megan vetoed pretty much every ride.  Oh well, next time.  The kids were very interested in the old bones and fossils, especially the sabre tooth cats.  (Shocker.)

The drive to Fresno felt like forever.  The kids were great, but man, snoozefest.  We were against the clock for the game since we were in line for over an hour at Pinks.  Maddy was going to be upset if we didn’t swim first, so we went 20 minutes out of the way to swim for 15 minutes in the frigid, murky, outdoor pool that was shaded by trees.  I sat this one out.  (For the record, I’ve had the kids in the pool every day of the trip but Grandma’s.)  We were right in time for the game, well, until the half hour wait at Will Call.  Oh well.  This trip was for fun, not every pitch.

The Rainiers won big, 10-1.  I missed 8 of the 10 runs standing in line for pizza, ice cream, or bathrooms.  Sigh.  The experience has absolutely been worth it though!  The game ended with a fireworks display that paled in comparison to the Tacoma Opening Days. 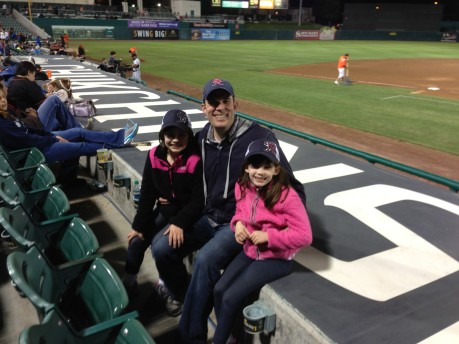 Still, the kids had a great time.  They spent the last few innings above the Rainiers dugout cheering “Let’s go Rainiers!” every time someone would start a “Let’s go Grizzlies” cheer.  It makes me smile anytime I see Megan come out of her shell like that.  Two young girls, cheering on the Rainiers on their dugout, are pretty much a magnet for baseballs.  It seemed like a near endless stream of baseballs that were either tossed their way, or rolled along the top of the dugout.  The girls passed them on to the other kids in the section though, there’s no shortage of baseballs in our house.

Friday was originally planned for Sacramento, but I just couldn’t justify the extra travel time.  At some point even I have to step back and say, “Yeah, that’s not a good idea”.  (Which is rare.  The voice-of-reason is not generally something I listen to.)  We’re already slated to start driving back tomorrow, so to tack on another close to 2 hours each way on top of it?  That’s just dumb, so we came back to San Francisco instead.

I’d debated hitting San Jose and a Sharks game, but decided to put that money into a better hotel by the Wharf.  (I shudder to think how much money we’ve spent on this trip and I thought the Sharks would be overkill.)  We hit the Wharf for lunch and both kids tried a bite of squid, which they didn’t like, but at least they tried it.  From there we drove out to Fort Point and the Golden Gate Bridge.  The bridge was mostly fogged in, like it had been on Tuesday, but within 10-15 minutes of us getting there the clouds parted like we were ‘Tourist Moses’.  Unbelievable and lucky!  (When I texted Amy, she said it was the same timing we have for Mt Rainier, which is true.  And Mt St Helens, and Mt McKinley during my last trip from Alaska.)  I can’t explain it, but I’ll take it!

Saturday was travel day, but not before a trip to AT&T Park to see the Giants before we go!  It was Buster Posey MVP trophy and bobblehead day, so the line getting in was a steady stream of people, but it moved pretty quickly.  I took the girls by the slides, which got double thumbs down for being too slow.  (I didn’t get to go down them this time since

they’d changed the rules to just kids.  At least I’d been on them before!)  We hit our seats in time for the opening ceremony, with an armload of snacks and treats.  I knew going in that Willy Mayes was going to be at the ceremony, but didn’t think to mention it to the girls, but when Maddy heard his name, her jaw dropped.  She’d heard “Say Hey…” so many times, that seeing that Willie Mays was like seeing a legend, which let’s be honest, he is.  “Dad, dad!  That’s Willie Mays!”

We left the game with a long drive ahead of us, but with a lifetime of memories to match.  Will the girls remember every detail of our time?  Of course not.  But when they get older, and see the pictures, they’ll tell their kids that they remember the time their Dad took them on a trip they’d never forget.  And then maybe they’ll take theirs too.

The trip has been everything I wanted.  The kids couldn’t have been better, and I’ve been sure to tell them repeatedly.  I knew they would do fine, but they’ve been better than just fine.  Yes, we’re not home yet, but that trip back won’t be what they’ll remember.  It’s been weird being away from Amy so long.  The kids and I both miss her and are anxious to see her Sunday.  The girls did better on the ‘mom front’ than I expected.  I don’t know if they’ve just been too busy to realize we’ve been gone over a week, or if this trip and the adventure of the road somehow helped them grow even more this week away.  Regardless, it will feel great to be home and I truly appreciate the experience we’ve had together this week.