This is the start of what could be the busiest baseball season ever!  I’m on my way to 3 days in Dodger Stadium – It’s the ‘World Baseball Classic’!  Venezuela, Korea, Japan, and USA.  I’m excited for a few days of baseball with fans from different parts of the globe.  The WBC is really a made-for-exposure style event, and in its second run, it seems to be

working!  The crowds look good and seem to be either traveling for the event, or they’re transplants and immigrants showing pride in their birth country.  Either way, it’s great!  The atmosphere for these games has the potential to be a totally different kind of experience.  Drums?  Banners?  Costumes?  It should be a blast!

I’m always excited for baseball season, and the fact that I’m heading to Dodger Stadium in March makes up for the fact that I’ll be missing my first Opening Day in 9 years.  (But with my schedule this year, it may be one of the only games I miss all year!  Exaggerating, sure, but it should be fun regardless.)

The Mariners re-signed Ken Griffey Jr.  Nostalgia at its best!  I promised the girls that if we signed Jr that I’d take them to Safeco.  Put 4/19 on the calendar.  (There are a lot of dates on the calendar this year.)  Our 2nd Opening Day for the Rainiers, Megan’s start of t-ball (which I think is the thing I’m most excited for,) and a late May trip to Kansas City, St Louis, Louisville, and Cincinnati.  Solid year, and it starts today!

It started yesterday!  I’m sitting in Dodger Stadium for Game 2 – Japan vs USA.  I’m hoping for a better game than yesterday.  Venezuela/Korea was an awful game.  5 errors from Venezuela, with Korea running all over.  It was interesting to see how aggressive the team was; they were forcing errors with the constant threat of running or taking the extra base.  The fans from both countries were really into it at the start, but things died down pretty quickly since the game was pretty much over in the 1st.

Dodger Stadium is still a fav!  They’ve updated the seats (no more overlapping seat numbers by row,) the bathrooms are all new, and the concession stands are all re-faced.  I made quick work of the concession stands, and have already put back a few Dodger Dogs, which I can eat pretty much like candy.

The game is ready to start!  USA vs Japan.  Next!

… Well, that wasn’t the game I was hoping for.  Adam Dunn is the worst throwing outfielder in the world.  Even with the rough game, it was still a good day.

I’d hit Magic Mountain before yesterday’s game, and targeted Pink’s Hot Dogs for today.  I was anxious, and for some reason kind of dreading the Superman ride at Magic Mountain, but other than being pretty fast – certainly not as fast as a speeding bullet – it wasn’t a big deal.  I didn’t make it on a ton of rides since I was limited for time.  (Next time I won’t go on a Saturday!)  I went on ‘Scream’ and ‘Riddler’s Revenge’, the world’s tallest and fastest standing coaster, and a handful of other rides before heading to Dodger Stadium.

Before today’s game, I drove around Hollywood and went to the world famous Pink’s Hot Dogs.  The stretch chili cheese dog was delicious.  (It looks heinous, but trust me, it was super tasty!  The chili truly makes the dog.)

Today’s game started with a lot of promise.  I watched every pitch, starting with Robert’s lead off home run, and it was close until the 4th inning, when Japan blew it open.  I expected a lot more noise from Japan.  Korea was loud and into it the entire game the day before, but Japan was more muted.  Were they saving it for tomorrow?  Or was it just unintended arrogance from Japan’s fans that just expected to be there for the Championship game?

While neither game has been all that great, they’ve still been a load of fun.  I’ve been making a point of talking to a ton of people.  I’ve gotten to know Mike and Kimmy from Phoenix, they’ve been sitting next to me these two days, and I’ve talked a lot of ball with the guys in front of me (but haven’t actually introduced myself).  I was hoping to get some good pictures these few days at the park and was able to get a great one with 2 Japanese guys in full-on game mode! 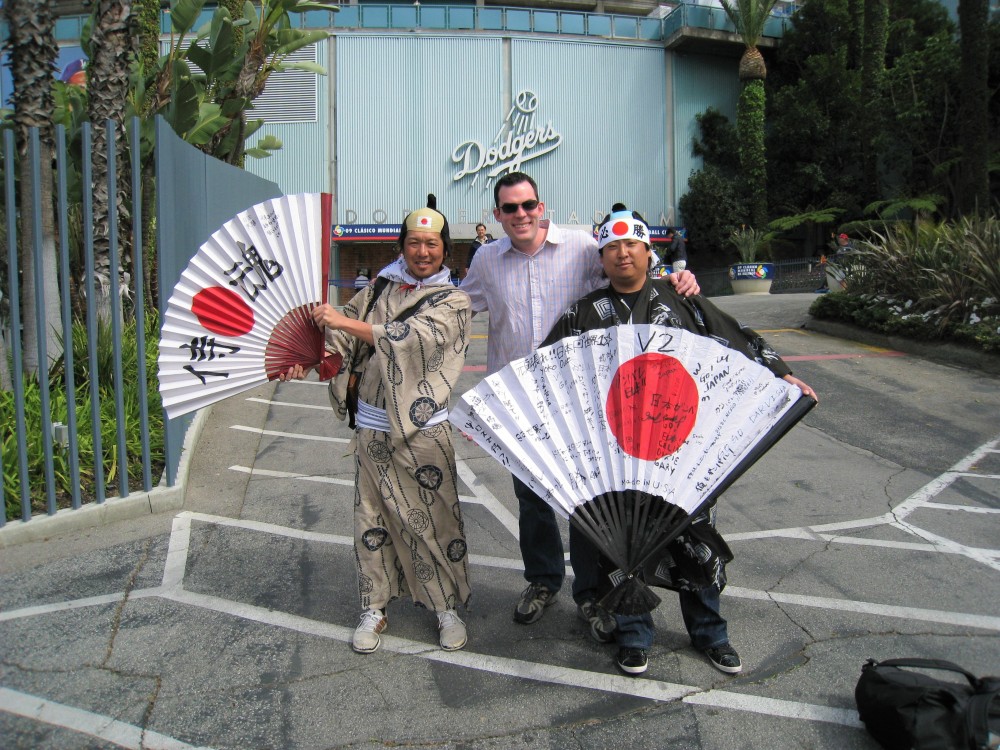 Next up, final game, Korea vs Japan!  (Prediction Korea 5-3)

WOW.  That’s really the only word that can describe that game.  Right score, wrong team.  Japan wins in extra innings.  The game was everything I went to the Finals for.  The atmosphere was incredible, and the game was even better.

It was a beautiful day heading into Game 3 (not that the other 2 days weren’t typical sunshine).  I was a few hours early, so I spent some time at the Elysian Park and Fields.  Sitting in the cool grass reading a book in the shade was just the right lead-in to the game.

I was sitting next to the same people as the previous days, part of the benefit to buying a strip of tickets.  I wondered if they were tired of me by then.  I finally got around to introducing myself to the guys in front of me.  Dave and Joe from Connecticut, both Yankees fans.  Both Mike and Kimmy, and Dave and Joe, had gone to the WBC in 2006.  I gave Kimmy, who’s Japanese, a hard time about being ‘Japanese again’ since she had worn a USA jersey the day before, but now showed up wearing Japan.

I didn’t realize how many Koreans there were in LA.  Korea was the ‘home’ team for the final, and it felt like it.  Leading into the game until the final pitch, the Korean fans were standing, screaming, chanting, and banging pans.  It was loud.  It felt like the ultimate playoff game.  Japan was a stark contrast to Korea.  The fans were loud, but not boisterous.  Was it a quiet confidence, fear, or culture?  Either way, the pride of both teams and fans was palpable.  I hope it translated the same way on TV.

The cheer from Korea was contagious.  4 quick words and a rapid bang of thundersticks.  By the 3rd inning I wanted to know what they were saying so I went and asked a Korean fan.

They were cheering “Korea!”

Japan was doing the same thing when they continuously cheered “Nippon!” “日本”

The game was a defensive gem.  Diving stops, catches at the wall, tags at the bag.  By the 9th, Korea was  down, but tied the game on a single.  There was an explosion of sound and emotion in the stands.  They flashed video of Seoul, Korea where they were watching the game live.  Japan led off the 10th, and Ichiro’s 4 for 4 ended up winning the game.

The crowd was spent.

I feel bad.  There are 2 Seattle Mariners on Team Japan and I was rooting for them to

The World Baseball Classic ended up being just that, an absolute classic.  From a baseball game experience, it couldn’t have been any better.  I hope that Japan’s dominance in the Classic will motivate the US players to be more involved.  The ones that did show wanted to be there, it’s just disappointing that more didn’t.  You didn’t hear a single player from Japan or Korea bitching about the level of competition being too soon or before the season.  There was no whining from team owners in Japan or Korea that their plays may be injured during an ‘exhibition’.  For those teams it was about pride and honor.  And wow, was I happy to be a part of it!