We didn’t know it when we left Dallas, but we knew it when we arrived in Houston.  Hurricane Katrina was a regional disaster.

Hurricane Katrina had crushed through New Orleans, causing immense flooding and a tragic loss of lives.  Anyone that could evacuate had, as they pushed north, east, and even west into as far as Houston.  Ted and I didn’t have any idea how many people were actually coming to Houston from Louisiana until we arrived to the flashing lights at our hotel.

We were staying at a cheap hotel, which was really more of a motel.  (This was before 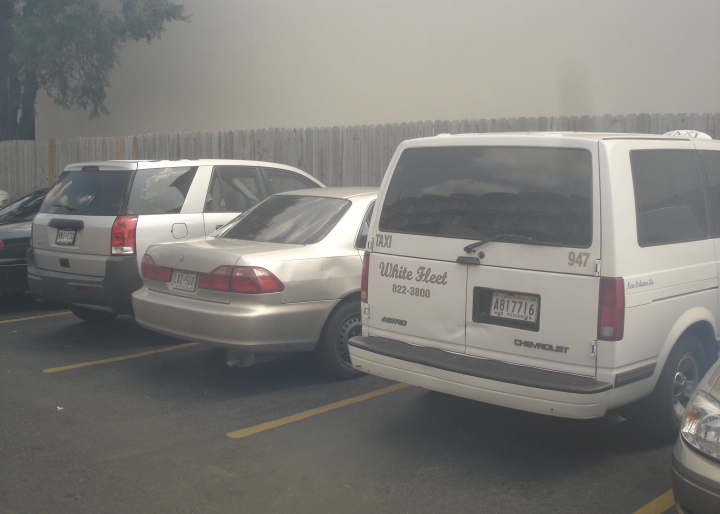 Ted’s “Doug, we can stay someplace nicer” speech, so it was already booked.)  The parking lot was packed with Louisiana plates, including a surprising number of taxis and vans-for-hire.  Every hotel/motel in Houston was sold out, or overbooked, and people were literally fighting for rooms, which is why the police were at our hotel when we got there.  Ted and I felt guilty taking a spot, given the situation.  We could have afforded to stay someplace nicer, but there was nowhere else to go.  At least the people that had made it to Houston had the money to go someplace else.  What about the thousands that were still behind?

Before the hurricane, I had thought about checking out the unused Astrodome, but that was out the window since Louisiana was busing people to Houston and the Astrodome to live while they waited to see what was next.  It was incredibly surreal and sad.  How many people here had lost everything?

When we left Houston to drive back to Dallas to fly out, we’d debated turning right and driving to New Orleans.  So many had mobilized to do something, anything to help.  We wanted to do the same thing but couldn’t.  Like so many others we made donations for support and decided the last thing New Orleans needed was two guys from Seattle driving over and getting in the way.  After all, they were working to get people out of New Orleans, not in.

The game, and the park, felt really secondary.

I’d targeted the trip to see Ken Griffey Jr play with the Reds.  It’s a solid park, but I remember thinking it was really weird to see statues of guys that were still playing for the team.  (It would have made it a little hard to get rid of them, right?)  We had some delicious shrimp tacos, fajitas, and enchiladas (paired up with a crisp fruit lemonade) at Irma’s down the street before heading in. 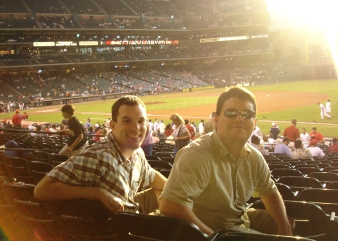 The thing that really stood out about the game wasn’t the game itself, but the action around us.  We were surrounded by guys in LSU caps and coats, or people in Saints gear.  I don’t know if anyone was truly watching the game, or if it was just a place for everyone to escape for the day.  The conversations weren’t about pitches or at bats, they were about the drive in from Louisiana, the things they’d seen, or the things they’d lost.