“Is it always like this?”  It wasn’t the question that hit me, it was the way that my wife had asked it.

About 5 years ago we went to our first baseball game as a family. 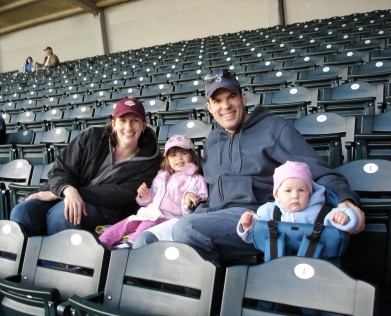 I’d already been to Cheney Stadium with Megan to watch the Tacoma Rainiers.  She’d lasted all of 5 pitches her first game, and made it thru all of her second game thanks to a steady diet of hot dogs and cotton candy.  Maddy was barely a year old, but I desperately wanted to get us to a game all together.  It was a tough morning for timing.  I remember pushing to go to the game, even though by the time we were ready to leave my wife and I were both on edge.  I wanted that “feeling” you get when you step into the park.  It felt important, like it was something that we had to do, that like it or not we were going to a game as a family!  Looking back even that day, it could have been a recipe for disaster.  The weather wasn’t great; it was overcast, cold, and threatening rain.  Maddy was a year old and wouldn’t remember the game.  Why was it so important?

We hadn’t made it to our seats when we had to stop.  I know what you’re thinking.  Bathroom?  Something to eat?  Bounce house?  No, it was Ben Cheney. 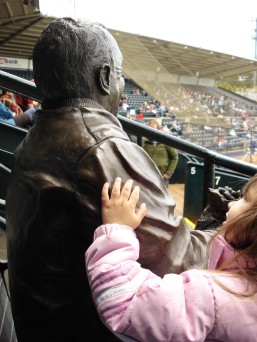 Ben Cheney died in 1971 after years of supporting local Tacoma athletics and creating a baseball tradition by bringing Pacific Coast League baseball to the city.  He’s immortalized as a statue sitting up from homeplate, complete with a bronze program and peanut shells on the ground.  Megan referred to him as “The Peanut Guy”.  She wanted to see The Peanut Guy before she could take her seat.  She took the steps up to the statue and reached up to the bronze peanut bag in Cheney’s hand, pinching at a nut on the top and then pretending to eat it.  Snacks in hand, we headed to our seats.

The game started like you’d expect.  The team took the field and the first few pitches were thrown.  Someone got a hit, or maybe they didn’t.  I don’t remember.  But, what I do remember is what happened next:  Megan cheered.  She was paying attention to the game.  But it was what she did next that really hit me.  She was explaining the game to her sister!  You have to understand, Megan wasn’t even 4 years old and Maddy was barely 1, but here she was telling her sister what team she wanted to win.

“Is it always like this?”  It wasn’t just what she said, or how she said it.  It was more than that.  Amy had a look in her eyes when she asked it, like all of a sudden she understood the feeling I was trying to get from the day.  I shook my head “No”.  It hadn’t been like that before, but from that day until today, it has been.

For years the girls have made a tradition of visiting The Peanut Guy. 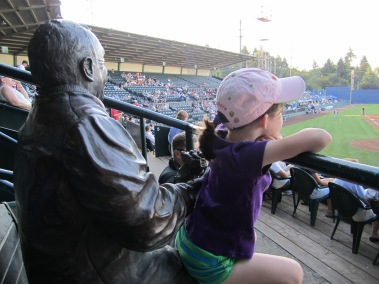 We sit next to Ben Cheney on the chipped wooden chairs, 50 years of paint peeling underneath, and pretend to grab a handful of peanuts.  We’ve been to a number of Opening Days at the park, and are there July 3rd in the parking lot, sharing parking spaces and a BBQ grill with my sister, her husband, and now their daughter.  We’ve been there in the sun, in the rain, and everywhere in between.  We’ve even slept on the field.  Cheney Stadium is a second home for us starting every April.

There are things you see in a Minor League park that you just don’t get in a Major League one.  There’s a sense of community.  You can walk the concourse and see people you know or recognize from your last game or even last year.  It’s the nod you get from a player on deck.  It’s the casual conversation you have with a player next to the dugout, or the way a player waves or says “Hi” to a kid in the stands.  It’s the way that almost every adult that gets a foul ball hands it to a child.

Support your local Minor Leagues!  Take your kids to a place where they can learn the game and have a great time.  Get your picture with the mascot.  Get there early so your child can meet a player that they might watch when they get older and “remember when”.  Stay late and watch the fireworks or run the bases.  The Minor Leagues are more than just the game, it’s the experience and memories that will stay with them long after you’ve lost that stub or scorecard.

Its been over 10 years since our first game as a family, and we’ve done a lot since then.  I’ve traveled thousands of miles with the girls to watch the Rainiers in California and Nevada, and we’ve flown across the country to watch baseball as a family in New York.

Baseball has been created a bond with my daughters that can’t be ignored.  Yes, the way they’ve watched the game has changed.  Maddy is more interested in the snacks than the game, but she still likes to go, because she’s with her Dad.  Megan analyzes the game and is at the stage where she could have done it ‘better’.  (She’s 14, so as you’d expect, knows everything.)

Sadly, we don’t make it to as many Rainiers games anymore, but it’s not because we’ve lost the love for the game, it’s because sometimes there just isn’t enough time.  Now, instead of catching a Rainiers game, Megan is catching a game of her own behind the plate.  The hours we’d spend at Cheney Stadium have been replaced by hours at a softball field.  It’s different now, but the same.  A constant.  It’s like Terrence Mann (JD Salinger in the book) said in ‘Field of Dreams’, “The one constant through all the years…. has been baseball.  It reminds us of all that once was good, and that could be again”.  It’s the same way I feel about the Minor Leagues.  There’s a pureness to it, a reminder of everything we love about the game, and everything that it can be for our kids.  Start them early enough, and they’ll love it forever.